After taking it apart I verified that the issue was the switch pivots were popping out causing the connections to be incorrect. The pivots are so small and I can see that they could easily get worn out causing the unit to no longer function correctly.

After looking it over I decided that drilling out the pivot points and running a small bolt through would be a much better solution/design.

First, take the device apart, it is pretty easy but one thing to watch for is that the horn button has a spring and if you are not careful the horn button and spring will go flying, which happened to me. If this happens to you find a mechanical pen or pencil and some of them have a spring in them that will work, I had to try three different types before I found one that worked.

Next, pull the rocker switch out and then drilled out the pivot points with an M2 sized drill bit. Then put the switch back in and run an M2 bolt through. I used some thread lock and finger tined the nut down and that seemed to do it.

After verifying the fix worked and the lights were working correctly I had to put it back together. One issue I came across while putting it back together was due to the size of the bolt head and nut it no longer fit correctly in the case. I cut out two sections on the case to make it fit.

After getting it back together and mounted back on the bike everything worked as expected and it is now stronger than its original design.

Sicass Part # that this should work for: 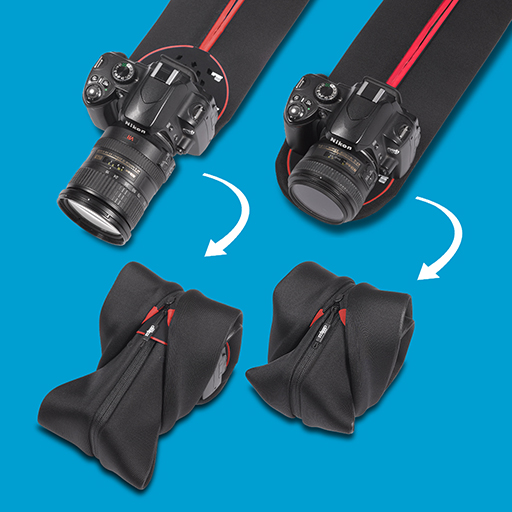 The Miggo is a product that was funded by a Kickstart campaign and is described as follows:

My first impression was that it is well built and seems like it will hold up to the test of time. It did seem to be a bit balky, but in my opinion that is necessary to be able to pad the camera.

My impression after testing it on my Canon 6D and my old Canon 350D, both of which had a Canon 24-105mm f/4L lens on, is that it was NOT designed for professional or larger DSLR cameras, it just didn’t fit well on my Canon 6D.

I would recommend a Miggo if the following sounds like you: You have a smaller DSLR cameras, you don’t change lens very often and/or you keep you camera in a hand bag or other such bag, otherwise I would go with something from Peak Design.